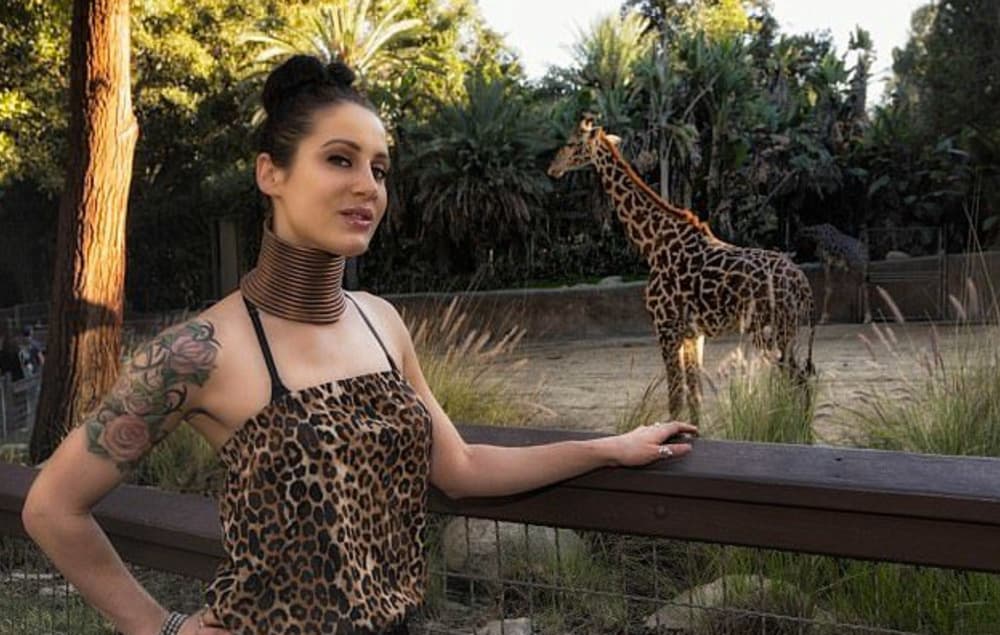 A few years ago, there lived a beautiful lady aged 30 years named Sydney V. Smith, but was well known as “The giraffe woman.” She made herself famous globally by taking some physical measures to look like a giraffe. She had the passion for animals, specifically the giraffes. Sydney loved giraffes; their physical appearances and what most captured her mind were their stretched necks. She valued giraffes, and she defined herself as “The giraffe woman.”

One of the most critical questions that people ask is how did this woman try to transform herself to be like that of the giraffe. Sydney designed her purse in a colorful giraffe makeover, and she proudly carried it around.

Most people started making fun of her by cracking funny jokes of her appearance, but she didn’t pay much attention to them since she loved it. This gave her a lot of confidence, and she even designed more of her jewelry, shoes, and clothes, with a lot of colors same as that of the giraffe’s skin.

Due to her unique fashion designs, including her creativity in arts and designs which she had pursued in college when she was still a student, most people wanted to know more about her. Others were so fascinated by her fashion taste that they ordered some. Sydney was excited that she started her own design business.

Finally, she was able to generate more income and be self-reliant. She was so proud of herself that she couldn’t believe she could do that on her own. The media took a keen interest in her, and she was interviewed severally hence advertising more on her designs and promoting her business. At times, she would be called in shows and auditions.

Sydney’s dreams came true when a big show that was organized by investors to young nature talents. Luckily, she was among the shortlisted contestants. She had to show off her unique ability. She stretched her neck by putting on some copper metal rings so that it could lengthen it.

She managed to evoke an intense interest like those giraffes in the Kayan Lahwi tribes of Thailand and Burma. After the audition, she emerged best and decided to keep the metal rings on her neck.

As time passed, she continued to add more rings on her neck to elongate further. Slowly, the move paid off as she looked like the giraffe. But the party didn’t last long; the side effects kicked in. For the past several years, Sydney began feeling the fatigue of the rings and started second-guessing herself.

Ultimately, she made up her mind and decided to remove all the metal rings on her neck. Her health was starting to deteriorate slowly, and she couldn’t hold on anymore. After removing the metal rings, she noticed that there were several stretch marks left on her neck and some were bruises that made her feel pain.

Sydney realized that all the fame she acquired as “The giraffe woman” was nothing compared to her health.
Currently, Sydney is undergoing continuous physical therapy to fight with the chronic rigidity of her neck caused by the prolonged wearing of the metal rings.

Originally filmed and released in 1971, the classic kid lesson movie of Willy Wonka & the Chocolate Factory became a bit of a sleeper hit that crept across America and became a classic. The movie was replayed again and again on TV for years afterwards, and the golden ticket prize inside the chocolate bar that the movie’s hero wins has been replicated in jokes and references repeatedly. In 2005 the movie was released again in a new version, with actor Johnny Depp taking the role of Willy Wonka much further than Gene Wilder ever did, and it to become a success of its own as well. The second version resonated with audiences of another generation and had the same effect. So where are all those actors today? Many are grown up now and have had some interesting tales of their own as well.

The 20 Most Pause Worthy Moments in Movie History!

If you grew up with a VHS Player in your living room, you probably learned to get pretty handy with the pause and rewind buttons. With DVDs and streaming services ruling the day, those same skills are being put to the test! Hollywood is well known for putting together scandalous, exciting, and scintillating entertainment that can leave us dropping our jaw. Today, we are going to look at 20 moments in Hollywood history that we had to pause again and again and again!

Welcome to the 20 most paused moments in cinematic history!

The Miami Marlins has hired Kim Ng as its first new general manager. The hiring has made her the first female GM of Major League Baseball. NG is a 51 years old Asian American who has served as senior vice president of MLB for nine years.

She has also worked as assistant general manager for Los Angeles Dodgers and New York Yankees. These teams have made to the playoff eight times and won the World Series titles three times.

According to Bruce Sherman, the Principle owner of Miami Marlin, the entire leadership is looking forward to working with Kim Ng. The ownership group hopes that Ng will work to improve the skills of Miami Marlins’ players.

Ng is an experienced individual and a champion-level skilled coach who will play a key role in Miami Marlins’ success – said Derek Jeter, the CEO of Marlins. Besides, her extensive work in streamlining youth baseball will grow the game among Miami youth as she will continue making substantial efforts to encourage the South Florida Community.

The Highest-Ranking Woman in Baseball

Kim Ng broke into the baseball game as an intern and spent her time to carry out operations in the Chicago White Sox. She is considered the highest-ranking woman when it comes to baseball operations among the 30 league teams. She is the first female general manager in all major North American sports leagues for men.

Ng is determined to build a team that would achieve successes in the major league. She will make substantial efforts to build for a long term in Florida and develop collaborative, forward-thinking baseball operation with dedicated and talented staff.

An Inspiration for Millions of Women

According to Rob Manfred, the MLB commissioner, everyone at the major league baseball is happy and thrilled for Ng as well as the opportunity she has earned with Miami Marlins. Ng’s appointment will make history in baseball and other professional sports.

Her role as a general manager is a great example for millions of girls and women who love to play softball and baseball. The leadership skills, the hard work, the record of achievements, and dedication throughout her career led to this incredible outcome. Rob Manfred said that he wishes Ng all the best as she starts her career as a general manager with Miami Marlins.

It is indeed an incredible achievement to become the first female general manager in major league baseball. Ng said that young boys and girls would take notice of this and realize that they can achieve anything they dream of.

Kim NG directed baseball operations with MLB and worked with the front offices of many league clubs around the world. She is looking forward to developing a sophisticated policy for the Miami Marlins, enable them to experience new heights of success.

For Mersey Marine player Bayleigh Passant, he wanted to do something different for his twentieth birthday. So, the famous soccer player and goalkeeper decided to do something for the fans. The day was already special with Passants work contributing to his team winning and becoming a seat in the FA Cup third round of competitions. As soon as the game was over, off Passant went to the local market for a surprise.

Suddenly, much to the amazement of the fans and club aficionados, Passant walks up to the crowd with a bag full of merriment and drinks to celebrate both the game win as well as his own birthday. The fans were flabbergasted. This was all after quite a bit of impressive work on the field, where the goalkeeper made sure none of the opponents even had a chance to make a mark by refusing to give anyone a point at all. The game ended 1-0 in favor of Mersey, and Passant was a player of day in that performance.

How did the rest of the world find out about this little after-game soiree? Electronically, of course. Much of that recognition was due to one fan, Stuart Wilks-Heeg, being smart enough to post photos of the celebration and after-game medley on Twitter. He summed up the unexpected extra game bonus as one of his top moments of 2020, seeing his favorite team win in the FA Cup as well has having a drink with the goalkeeper to boot.

Even better, Passant made no effort to hide himself from fans, passerbys and photogs. He was out on the street right after the game, walked right into the local market still wearing his game kit, and handed out beers at the field gate while still in full game uniform. As Stuart noted, many felt like they just went back in time, celebrating with their hero players in person and hanging out with legends in the real flesh.

All in all, more than three cases of lager were handed out to the available fans, and Passant was right in the middle of it. For Marine, Passant’s team, the entire night was an unbelievable turn of events. Few expected a non-league team to make a showing much less hammer through a full position into the FA Cup. Everybody from the players to management to admin were going nuts with the turn of events in their favor. What will really put things over the top is if Passant’s ends up being faced with another team from Mersey as their competition in the next round. An all-Mersey game will literally bring out the stoppers and make the entire town go bonkers rooting for one side or the other. 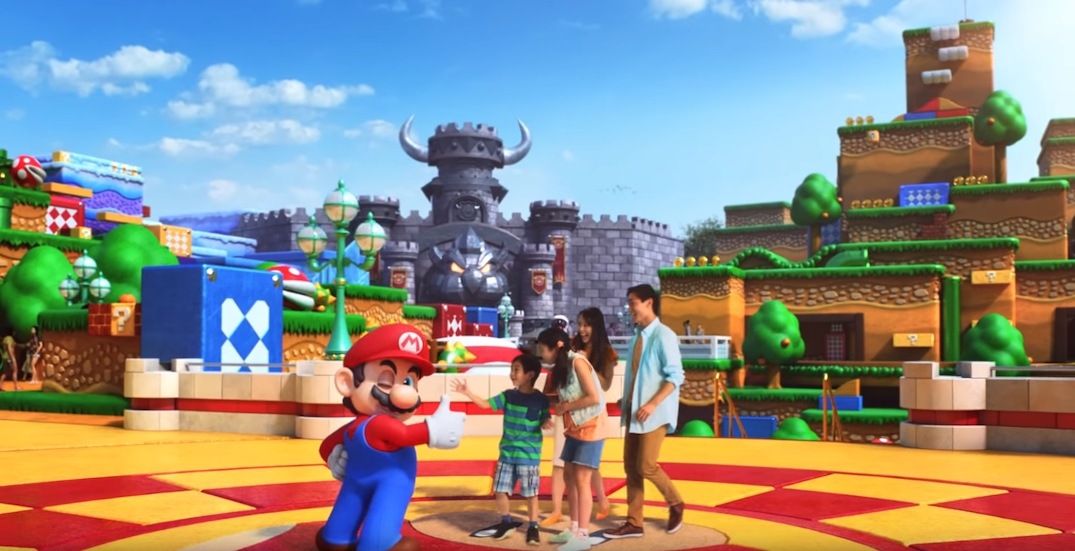 It’s good news. Super Nintendo World will be opened  in the spring season of 2021.

The theme park has been scheduled for opening earlier this year before the inception of the Olympic Games in Tokyo. Situated at Universal Studios Japan in Osaka, restrictions due to the COVID-19 pandemic meant they had to shelve launching plans. Since the Olympic Games had been rescheduled till next summer, one will get to savor the experience of the sporting events and also have fun in the much awaited theme park.

Osaka Is The Home Of Super Nintendo World

Nintendo made it known that the Super Nintendo World at the Universal Studios Japan in Osaka will be a “living video game with state-of-the-art rides, interactive areas, shops restaurants and all will be featuring Nintendo’s most popular characters and games”

Guests and tourists who visit will be given smart wristbands that will be paired with an app and with that, they’ll have the access to take part in the virtual collecting sport and battle bosses.

Nintendo together with Universal Studios have disclosed some of the rides fans will get to enjoy in Osaka:

If you can’t wait to see a glimpse of the Super Nintendo World, you’ll have a chance to see it on October 16. The Mario Cafe and Store will be opened in Universal Studios Japan’s Hollywood area. Here’s how it will look.

Though the exterior and interior don’t show much, these photos give a sight of what to expect. Nintendo themselves have revealed what will be on the menu: Super Mushroom drink, Luigi-themed sandwiches, fruit cream sodas with mustaches

There are further plans by Nintendo and Universal Studios to set up more theme park areas at the Hollywood, Orlando and Singapore parks in the future.

Well, who wouldn’t like to go on a trip to Japan?